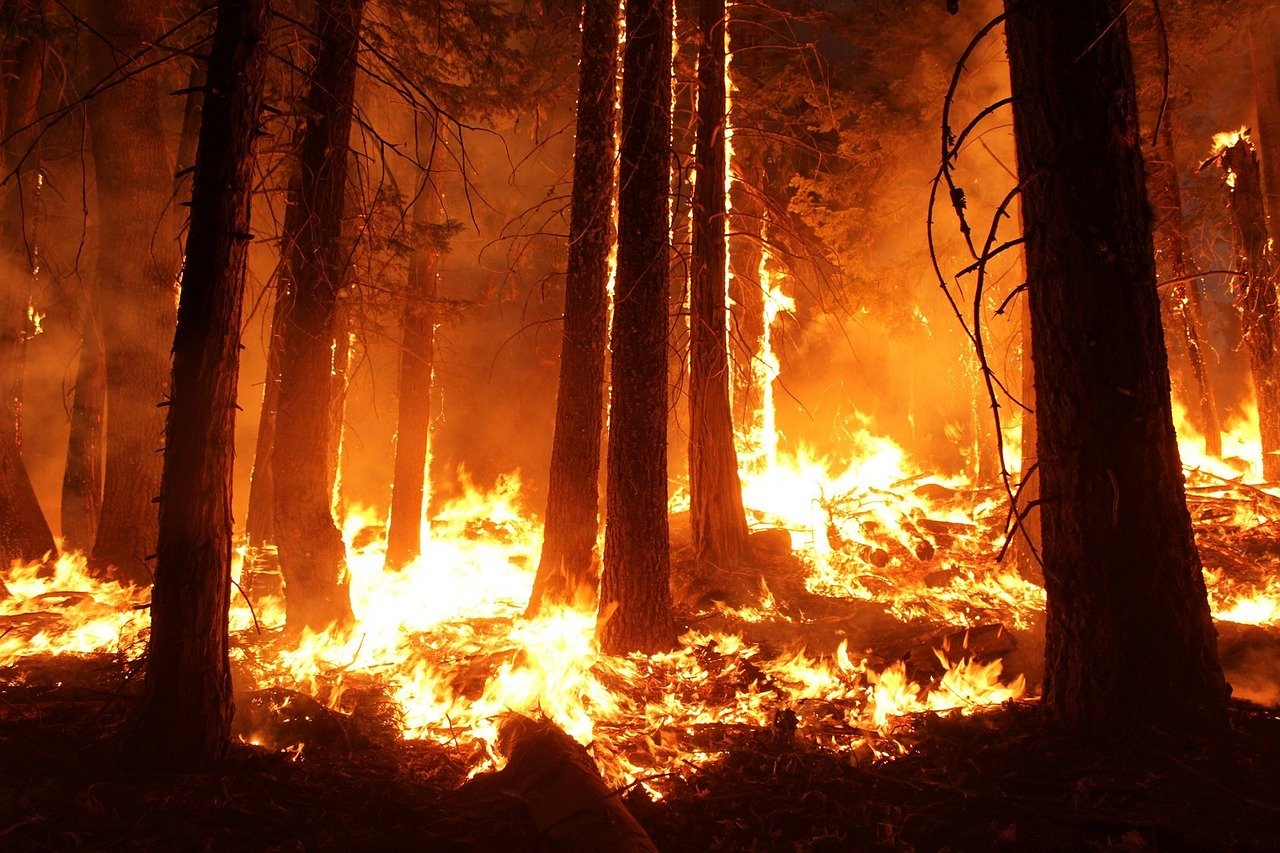 While it is now more widely accepted, veganism has always been a controversial subject in the eyes of the world. The plant-based diet carries a social stigma for its community, described as the latest ‘trend’ for new generations to sell their alternativeness, scorned for differing from the norm and deemed extreme by many. A 2015 study by Cara Mclnnis and Gordon Hodson shows that it is often viewed with equal or more hatred than groups of targeted prejudice such as atheists or members of the LGBT community. However, if there was a time to reconsider the meaning and value of veganism, it is today.

It has been an eventful summer, with temperatures reaching such heights to place 2019 in the top three warmest years, naming July 2019 as the hottest month to date. These climate anomalies have resulted in deaths being recorded all over Europe but the latest story that taking over the news are forest fires. Specifically, the one currently scorching the Amazonian forest.

The Amazonian forest has been harvested by farmers and cattle ranchers for decades to create pasture for mass-breeding of animals. When the fire broke the news it was quickly confirmed by both experts and environmentalists that the extreme agriculture was the catalyst. This was also followed by assertions that the Brazilian government hindered the news of the disaster from coming out, either to save face or to keep it going for as long as possible. So, after three weeks of the forest silently burning, the resulting public outrage led to a storm of prayers and donations from the public as celebrities and governments rallied to save the forest commonly referred to as ‘the planet’s lungs’. Be that as it may, one has to wonder if a response such as this one, that has come a thousand times before, will only have superficial results and, perhaps, we should dig a little deeper this time.

The reasons detected behind the Amazon disaster are deforestation along with (and a by-product of) extreme agriculture. These not only ascribe to 80% of the Amazon’s fires each year but they are also some of the main aggravations of climate change and greenhouse emissions. Maybe what we need to ask is: Why? Why is cutting a couple of trees in order to breed more animals so bad? Why should we give this issue more attention than other sources of carbon footprints, such as cars and factories? How is this even related to veganism? Let me shed a slither of light to a few of these questions for you dear readers.

Deforestation is a tale as old as time, with woodcutting being one of the oldest professions to date. It might surprise you to learn that deforestation by fire is the healthiest way to clear a forest land without preventing it from rejuvenating. But times are new, businesses are greedier than ever and the market is demanding; meat is one of the cheapest and most sought out products. So, naturally we cut down as many trees as possible in order to build the needed farms and warehouses. Lands are left barren while the high temperatures and wind encourage fires to blaze. And, again, why?

As much as we love meat on our table, according to healtheater.com from a health perspective we actually do not need the amount we consume or purchase and which contributes to this level of farming. It is actually advised by the World Cancer Research Fund to never eat more than three small servings of red meat per week, which to note is described as a safe amount, and to avoid processed meat such as ham, bacon or sausages all together. That being said, beef production takes up about 60 percent of agriculture land while it amounts for less than 2 percent of the world’s calorie intake. That is because we live in a world which values quantity more than anything. The production of beef and lamb makes up 50 percent of greenhouse gas emissions coming from food which amounts to a high 26 percent of the total emissions. That is an inflated percentage for something that seemingly should not be a concern if we regarded our diets with the same care we do with our clothes and belongings.

The truth is, veganism, with its strict dietary rules and restrictions, was never vital before but years and years of exhausting and mistreating our natural sources for an extraneous number of products, has led to this lifestyle becoming not just a stand but a valuable weapon. In fact, a recent UN report backed by 107 scientists advocated that a plant-based diet is a reliable and effective way to deal with climate change. It is a way for people to be hands-on to a threat becoming more and more apparent with each passing year.

But, we needn’t forget that veganism was initially a stand against the cruelty of animals that pasture is created for. It is a bit ironic to see the animals for which the trees are cut and burnt are also being treated with the same cruelty. While we are sold advertisements full of healthy cows happily chewing  grass, the industry is actually notorious for its mistreatment towards these animals. A quick internet research will expose you to hundreds of images of scrawny cattle with their bones visibly sticking out underneath their skin, so apparent you could count them with little effort. In these ‘factory farms’ the cows are made to produce 15 gallons of milk each day (14 more than they naturally do), while living in awful and unsanitary conditions that inflict them with wounds and infections in their hooves and udder.

In a similar case, battery chicken farms house four-week-old chicks who are shot with growth hormones turning them as big as four-year-old chickens for big brand stores to be stocked faster with our favorite chicken wings. These chicks are put in warehouses toppling over each other with no space to move and in total darkness as the overdose of hormones slowly leads to various physical impairments and chronic pains. Chicken meat is a beloved dish by many and a big source of protein but described above are just a glimpse of the suffering these animals endure before ending up packaged in our freezer. Their treatment is unnecessary, unjustified, and inhumane.

Consequently, even in the case of the Amazon fires, the root of the disaster can be traced back to overeager food industries as every aspect of their work is contaminated with greed and cruelty.  The saying ‘ignorance is bliss’ has been a very convenient excuse to avoid responsibility for a long time, but now we have reached a point where the problem can no longer be ignored if we hope to salvage anything for our generation and the ones to come. Scorned, dismissed or frowned upon, veganism is regardless an effective, scientifically proven action we can all take. No shout-outs, likes or distant donations will achieve long-term results if we do not embrace some change in our own lives.

At the same time, we have to acknowledge that veganism is not an easy lifestyle to follow, nor is it for everyone. The UN study pointed out that a plant-based diet could alleviate the current climate state but does that mean everyone has to renounce all meat and dairy products? Veganism for environmental purposes should not be viewed as a stop sign for food, people that are unable to follow its strict rulebook can instead take something from it and become more conscious eaters.  For example, when it comes to dairy there are a variety of non-dairy milks to choose from as a vegan, but if you are in need of actual milk there is the alternative of goat milk. While comparatively lesser known than cow milk, it is actually a great substitute, lacks the animal abuse scandals, and the cheese is delicious.

However, where an absence of milk can be tolerated, some people find giving up meat more difficult than quitting smoking. Fairly, when someone says they are vegans or vegetarians one thing that is unconditional is a zero percentage of meat in their diet; but it is possible to be a part of the change and cook a beef steak once in a while if we are careful of where we buy it from. Whether the goal is to reduce the general intake of meat or stop animal cruelty we should not be overlooking a particular sector of the business: local or independent farms. Local farm products are undeniably a bit pricier but they come from people who ethically raise animals. It is a business currently being smothered under the overbearing shadow of factory farms and well-known meat and dairy brands that stock the shelves of big chain stores such as Sainsbury’s and Asda.

As humans we have a tendency to see things very black and white, right or wrong, but that is seldom the case. When it comes to changing the status quo, completely forgoing and renouncing the use of certain products should not be viewed as the only way. This change can be achieved not only by quitting habits, but also switching them, finding better alternatives, supporting the right businesses, and getting informed. Local farms and businesses are the perfect way to be conscious of what you are eating and having the knowledge of how the food on your plate was made.

It is incredible to watch the change in the way we view veganism since the climate crisis struck red, but it is vital to not also view it unilaterally. A plant-focused lifestyle that also includes dairy and meat products can be just as powerful if they come from the right farms, and can even produce a manifold effect: helping the environment, taking a stand against animal cruelty, and helping local economy flourish. So, while veganism’s value has grown in the past few years, it is important to acknowledge its importance and benefits, take something from it, and understand that it is not the only way to help. Instead, add more greens than processed food in your plate, visit your local farmers’ market(s) or your local farm, and get more informed about the food you consume every day.